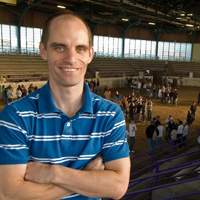 Dubbed “the prophet of an education revolution,” Wesch won the highly coveted “US Professor of the Year” CASE/Carnegie Foundation Award for Advancement in Teaching in 2008. After two years studying the implications of writing on a remote indigenous culture in the rain forest of Papua New Guinea, he turned his attention to the effects of social media and digital technology on global society. His videos on culture, technology, education, and information have been viewed over 20 million times, translated in over 20 languages, and are frequently featured at international film festivals and major academic conferences worldwide. Wesch has won several major awards for his work, including a Wired Magazine Rave Award, the John Culkin Award for Outstanding Praxis in Media Ecology, and he was named an Emerging Explorer by National Geographic.  After years of experimenting with social media and praising the learning potential of these tools, Wesch realized that they don’t automatically establish either genuine empathy or meaningful bonds between professors and students. Using social media is but one of the many possible ways to connect, but the message that Wesch’s experimentation brings is that only genuine connections may restore the sense of joy and curiosity that we hope to instill in our students.